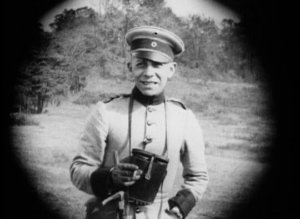 My viewing of The Unbeliever coincided with reading film historian Charles Musser’s Before the Nickelodeon – Edwin S. Porter and the Edison Manufacturing Company. It’s one of the last films released by the Edison company before Edison, who once dominated the American film industry, washed his hands of the movie business. The book details how competitive the business was from the very beginning and the often unscrupulous business tactics employed by Edison and his legal team. It also traces Porter’s life and career with an emphasis on his years with Edison. His 1903 film The Great Train Robbery was one of the most groundbreaking and popular films of its time but by 1908 his films were harshly criticized for being difficult to understand and not adopting the editing techniques employed by D.W. Griffith, who worked for Edison’s chief rival amongst American film producers, the Biograph company. Porter and Edison parted ways in 1909 but that wasn’t the end of Porter’s career. His success with the Rex Motion Picture Manufacturing Company, which he co-founded, restored his reputation. It eventually became the Universal Film Manufacturing Company. While still at Rex, Porter formed the Famous Players Film Company, which became the first studio to regularly release feature length films and Porter even directed Mary Pickford’s first feature-length film, A Good Little Devil (1914). The Edison company, on the other hand, was more concerned about cutting costs than box office success. By the time they got around to making feature films, like The Unbeliever, Edison felt it would be too expensive to reorganize the company in order to keep up with the competition.

The Unbeliever was directed by Alan Crosland, who is best known as the director of The Jazz Singer (1927) and its cast includes Erich von Stroheim playing, you guessed it, a sadistic German officer. In the 1910’s there was a backlash against the American film industry led by religious and moral groups. Since that time, Edison, concerned about his legacy, made it a policy that the films he produced should be wholesome and moralizing. Thus this film, though it is a typical WWI American propaganda film with some exciting battle scenes, really uses the war as a backdrop for the story of a wealthy young atheist who finds God, love, and loses his sense of class distinction. In addition to YouTube, this film is available on disc four of the DVD set Edison – The Invention of the Movies: 1891-1918 with a piano score and a few comments from film scholars which precede the film.

The Unbeliever at imdb.com