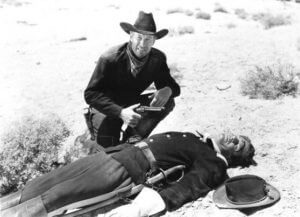 The best little Western you’ve never seen! The rather generic title might put one off but this is a quality B Western from the studio that specialized in the genre, Republic Pictures. At the heart of the story is a conflict between Wade Proctor, an unscrupulous cattle rancher with a large operation, and a group of cattle ranchers with smaller herds. Whereas Westerns about range wars may be rather common I found this one intriguing not only because it is well done but I sensed that there is more going on here than meets the eye.

As far as I know, neither the director nor screenwriter had any problems with the House Un-American Activities Committee but there seemed to be a message involved when the ranchers join forces and band their herds together in order to stand up to Proctor (“Worker of the world, unite!”). Proctor has a hired group of henchmen that he uses to intimidate the ranchers and he owns the only figure of law enforcement in the area, an elderly and cowardly judge who is financially dependent on Proctor. In today’s terms the story could be seen as a metaphor for the struggle of the 99% against the 1%. The plot device is as old as the biblical tale of David and Goliath and I may be stretching things a bit too far but consider that the story on which the screenplay was based was written by Thames Ross Williamson (1894-1961), who was not only a prolific writer of novels and screenplays but also wrote text books on economics and political science. He studied at Harvard, taught and lectured on economics all over the world. Certainly his interests in economics and political science informed his fiction writing. I can’t say for sure what Williamson’s political persuasions were but the outcome of the film may be a clue.

The theme of good vs. evil is of course common to almost all Westerns which I think is part of their universal appeal. The concept of evil is a human invention which to me describes impulses emanating from the unconscious and collective unconscious. We all struggle with unconscious impulses. It’s not that there are good men and bad men but that good and evil, or consciousness and unconsciousness, are at war within each of us. This particular film deals with the evil, or unconscious impulse, known as greed. Wade Proctor is a man totally given over to the impulse. He is not so much a man as he is a personification of a vice. Of course those who oppose him are personifications of good or consciousness. More recent Westerns have given us characters that are more true to life in that they are a mixture of good and evil impulses but I feel that many older, simpler Westerns can also be taken as true to life if one regards them in a metaphorical way.

The Savage Horde at imdb.com

As of August, 2016 The Savage Horde is available to stream at Amazon.