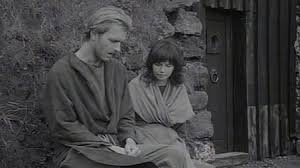 Nietzchka Keene (1952-2004), writer and director of The Juniper Tree, had a background in Old Icelandic Studies and won a Fulbright Fellowship to make a film in Iceland. She ended up making a different film than she had proposed which upset some of the people at the Fulbright Program but the actors felt the story was essentially Icelandic even though it was based on a fairy tale collected by the Brothers Grimm. The fairy tale is the evil stepmother variety in which a widower with a young son marries another woman who gives birth to a girl. The stepmother, jealous of the boy, kills him, cooks him in a stew, and serves it to her husband. The stepmother also manages to convince her daughter that she killed her half brother. Keene adapted the tale to include witchcraft which is an undercurrent in many of the Grimm tales that involve women. She also made the role of the little girl and her experience the focus of the film. She and her older sister are forced to flee their village after their mother is accused of being a witch and burned at the stake. They seek the protection of a man in order to survive and when they come across the widower with the young son the older sister casts a spell which prevents him from ever leaving her.

In an interview included on the Rhino Edition DVD Keene explains that she isn’t making a statement about witchcraft noting that the film never shows that the spells actually work. She feels that many who were accused of witchcraft in the early 17th century were merely practicing folk medicine. The sisters use the only knowledge they have in an effort to control an environment in which they are extremely vulnerable. Keene was more interested in creating a fairy tale world and a mood of melancholic loneliness which is part of the reason she chose to shoot in black and white on bleak locations.

The film was shot in 1986 but due to financial difficulties not released until 1990. Originally a 13 year old girl was cast to play the lead role but when that didn’t work out Keene was able to get 19 year old Björk to play the part even though she had just given birth to her first child. This was Björk’s and Keene’s feature film debut.  Björk’s subsequent international success as a singer is the main reason this film is still in circulation. Keene made one more feature film which was first shown four years after her death.

The Juniper Tree at imdb.com

As of April, 2016 The Juniper Tree is available to rent on DVD from Netflix.com