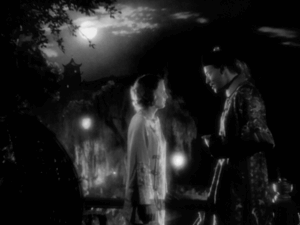 “I know it didn’t make money, but it has more real movie in it than any other I did.”

Frank Capra, who in the early 30’s desperately wanted to win an Oscar, realized that the commercial romantic comedies he had been making would never be considered by the Academy and chose to make, in Columbia studio head Harry Cohn’s words, “arty junk” that usually wins awards. Despite his cynicism, Cohn allotted a million dollars to the project, the biggest budget so far for Columbia which was still considered a Poverty Row studio.

The story of unrequited love may also have had an appeal for Capra due to the fact that he had been rejected by Barbara Stanwyck, who is the star of The Bitter Tea of General Yen, and whom he fell in love and began an affair with during the shooting of their first film together, Ladies of Leisure (1930).

This may be Capra’s and frequent collaborator, cinematographer Joseph Walker’s most visually striking film. Its bold lighting and compositions often dominated by darkness seems closer in style to Josef von Sternberg than most of Capra’s other films.

The screenplay is based on a novel by Grace Zaring Stone in which a young American missionary, Megan, confronts her own racial prejudices and notions of white supremacy when she travels to China to wed her childhood sweetheart, also a missionary. As the film opens, a group of missionaries prepare for the marriage oblivious to the pain and suffering all around them. The story is set in Shanghai in the late 20’s during the Chinese Civil War. The missionaries make condescending and derogatory remarks about the Chinese for whom they’ve come to convert to their so-called superior way of life and values. Probably a large percentage of Western film audiences in 1933 were in agreement with the sentiments of the missionary characters and though it may seem at first that the film is reinforcing racial stereotypes its real mission is to shatter those stereotypes and show that the Chinese are human beings just like everyone else.

Before the marriage can take place, Megan and her fiancé rush off the save some orphans that are in danger. In the chaos of the war they’re separated and she’s knocked unconscious. When she awakes she finds she’s been rescued/kidnapped by General Yen, a Chinese warlord. Yen is ruthless when it comes to dealing with his enemies but he behaves with Megan like a perfect gentleman. Though she rebuffs his attempts to seduce her, a dream sequence reveals that she harbors a sexual desire for the General. He manages to reveal Megan’s hypocrisy more than once. On one occasion after she states that “we’re all of one flesh and blood”, he puts his hand on hers but she quickly withdraws it.

This miscegenous aspect of the story was probably the main reason it failed at the box office. It probably couldn’t even have been made after the Hays Code went into effect the following year. In 1950 when Columbia tried to reissue the film the Production Code Administration found that the subject matter was “very questionable” and it wasn’t rereleased.

Besides the interracial love affair they also objected to the characterizations of Americans in the film. Yen’s financial advisor is an American war profiteer who is the personification of American imperialism which has always used the pretext of spreading liberty while pursuing hidden agendas. Perhaps this shouldn’t come as a surprise considering that at the time even Capra’s It’s a Wonderful Life (1946) was thought to be communist propaganda by the FBI and the HUAC due to the fact that it portrayed a banker in an unfavorable light.

Capra managed to win Oscars and help Columbia on its way to becoming a major studio the following year with, ironically enough, the romantic comedy It Happened One Night. He would return to the theme of East meets West in Lost Horizon (1937) where once again the perceived superiority of the Western way of life is called into question.

The Bitter Tea of General Yen at imdb.com

As of October, 2016 The Bitter Tea of General Yen  is available to rent on DVD from ClassicFlix.com.