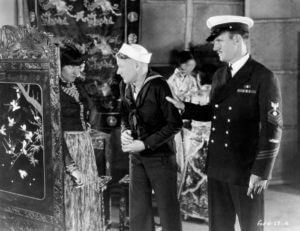 The sound version of this early talkie by John Ford has been lost. What survives is the International Sound Version which means that most of the dialogue is conveyed via subtitles but the score, songs, and sound effects from the sound version remain. The subtitles would then be translated to various other languages which was cheaper than re-shooting the entire film with a cast that was fluent in the appropriate language, known as a Foreign Language Version. Despite the unevenness due to the clunky transitions from the soundtrack to subtitles, this is a pretty good story about a submarine crew struggling to survive after an accident leaves them trapped in their sub on the ocean floor. Ford’s signature visual style isn’t very apparent here. Keep an eye out for John Wayne in an uncredited appearance as a radio operator on one of the rescue ships.

Men Without Women at imdb

As of June, 2016 Men Without Women is available on DVD from Amazon.com