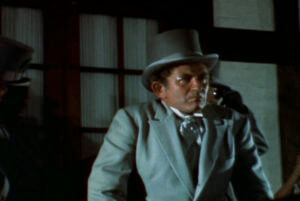 Norman Mailer noticed in the late 50’s that the novel was no longer a hot medium, started visiting the Actor’s Studio, and adopted “The Method.” By 1967 he felt he was ready to write, direct, and star in his own films using John Cassavetes’ improvisational approach despite the fact that he had no screen presence nor acting ability. Criterion has included three of Mailer’s films in Maidstone and Other Films by Norman Mailer as part of their Eclipse Series. Mailer’s only other directorial effort was Tough Guys Don’t Dance (1987). Maidstone, Mailer’s third film, stars Mailer as Norman Kingsley (Kingsley was Mailer’s middle name), who makes soft core porn and is also running for president. Mailer assembled a large cast on several estates in the Hamptons, provided drugs and alcohol, and shot 45 hours of material over five days in cinéma vérité style with a crew that included five cameramen. Things apparently fell apart during what was to be a climatic ballroom scene with one cast member seemingly suffering a psychotic episode. The following day Mailer assembled his cast and crew and tried to explain what he was trying to do. This was also filmed and included in the final cut and followed by footage of actor Rip Torn and Mailer having an actual violent and bloody confrontation. Unsurprisingly, the result is a train wreck of a film that must have been or still is an embarrassment to anyone involved. Only recommended to the curious or fans of bad cinema.

As of April, 2016 Maidstone is available on DVD from Amazon.com and also on YouTube: