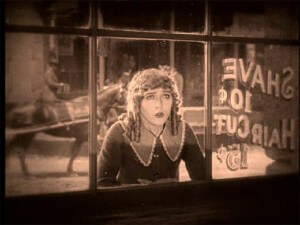 Mary Pickford was one of Hollywood’s first international superstars. In 1919 she founded the independent film production company United Artists along with then husband Douglas Fairbanks, Charlie Chaplin, and D.W. Griffith.  This gave her complete control over every aspect of her own films. Little Lord Fauntleroy is remarkable for its production values. The quality of the sets, costumes, locations, and cinematography bespeak of an MGM production during their heyday though that era came about long after this film was made. Also notable are the special effects. Pickford plays a dual role here as Cedric Errol, a young boy, and as Cedric’s mother, “Dearest”. There are several scenes in which these characters appear together which all had to be done with double exposures but the results are seamless and will have you wondering how it could be done before the age of digital compositing. Pickford is convincing and endearing as “Dearest” but not so much as Cedric. A child actor would’ve been more appropriate for the role but Pickford’s public may have been disappointed by a Mary Pickford film that didn’t feature her as the main star. Pickford was well known for playing child characters such as in Pollyanna (1920) but this is her only attempt at playing a boy as far as I know. The story, based on the novel by Frances Hodgson Burnett, is the sentimental type of family fare that you find in a lot of Disney films.  The restored print used for the Milestone DVD looks excellent and includes a lovely, though at times generic and overwrought, orchestral score.  Due to the simplistic nature of the narrative I can’t really recommend this film to anyone other than children, Pickford fans, and silent film buffs interested in state of the art filmmaking from the early twenties.

The Milestone edition DVD, as of September, 2015 is available to rent from Netflix