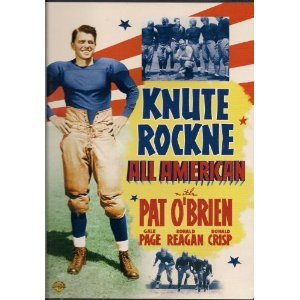 Though I’m not a sports fan I enjoyed this quite a bit. It’s a biopic on Knute Rockne (1888 – 1931) who emigrated to America at age 5 with his family from Norway. Growing up in Chicago he developed an interest in football and went to school at Notre Dame where he studied chemistry and played on the football team. He is credited for revolutionizing football due to a famous game with the Army team in 1913 where he and Charlie Dorais utilized the forward pass which had previously not been used regularly in any major contest.  The film emphasizes the moral standards that Rockne instilled in the students he coached. He strongly believed that athletics were an educational necessity due to what he perceived as a progression towards flaccidity in America. He even goes as far to state that football can prevent wars in an impassioned speech he gives to a committee investigating allegations of professionalism in college football. This was the role of a lifetime for Pat O’Brien who bears a remarkable resemblance to Rockne. I’ve never heard any recordings of Rockne speaking but I’ve read that O’Brien was able to perfectly mimic his speech delivery which sounds a lot like James Cagney. I’ve also read that this was O’Brien’s favorite role. Ronald Reagan is rather likable in a small role as George “The Gipper” Gip, a rather flippant young man with whom Rockne developed a very close relationship. If you’ve ever wondered where the phrase “Win one for the Gipper” originated from this film will explain it for you.

Knute Rockne All American at imdb

As of July, 2015 Knute Rockne All American is available to rent on DVD from Netflix