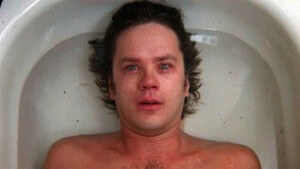 SPOILER ALERT! IF YOU HAVEN’T SEEN THIS FILM STOP READING NOW! Simply put, Jacob’s Ladder is a movie about dying. Before writing the script for this film and Ghost (also released in 1990), Bruce Joel Rubin spent two years in a Tibetan Buddhist monastery. His view is that Jacob’s Ladder is a modern interpretation of the Bardo Thodol, known in the West as the Tibetan Book of the Dead, which, among other things, was intended as a guide for those who are preparing for death and the interval between death and rebirth. The film’s title is also a reference to the biblical story of Jacob’s dream of a ladder between heaven and earth. Part of director Adrian Lyne’s preparation for the film was reading numerous accounts of near-death experiences. Both were influenced by Occurrence at Owl Creek Bridge, a short film from 1962 based on a short story of the same name by Ambrose Bierce published in 1890.  The film in not meant to merely entertain. Its message is voiced by a chiropractor (Danny Aiello), who functions as Jacob’s guide through his transition from life to death. He quotes Christian mystic, Meister Eckhart, who said, or is supposed to have said, “if you’re frightened of dying and you’re holding on, you’ll see devils tearing your life away. But if you’ve made your peace, then the devils are really angels, freeing you from the earth.” What makes death frightening and painful are our attachments to earthly experiences. Part of what makes this film so touching is Tim Robbins’ performance as Jacob Singer. Other actors considered for the part included Tom Hanks, Al Pacino, Dustin Hoffman, and Richard Gere but I can’t imagine any actor other than Robbins who could’ve made Jacob so lovable a character. Maurice Jarre’s score is also effective at inducing an emotional response. The film did moderately well during its original theatrical run, managing to do a little better than break even, but has developed a cult following since then. It is considered an influential film and to have inspired later films such as M. Night Shyamalan’s The Sixth Sense (1999) and David Lynch’s Mulholland Drive (2001).

As of November, 2015 Jacob’s Ladder is available to rent from Netflix.