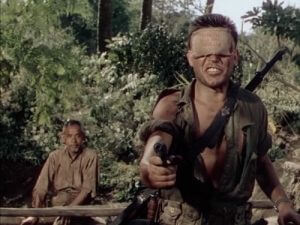 “The everlasting story of the everlasting glory of the UNITED STATES MARINES!” That tagline might lead one to expect this film to be a gung-ho pro-America, pro-war film. It certainly has enough action and ‘splosions to satisfy your average war film fan but this is essentially an anti-war film. That may come as no surprise if you’ve seen one of the earliest anti-war films, All Quiet on the Western Front (1930) by the same director, Lewis Milestone. The story takes place during WWII where a company of Marines have landed on a Japanese held island in the Pacific. As they advance inland the Japanese launch an unrelenting rocket attack and the combined US forces are unable to locate the rocket base. Richard Widmark stars as Lt. Anderson who is tasked with capturing Japanese prisoners in order to get information from them about the rocket base. The quest to solve this mystery, which involves an understanding of the Japanese psyche and a bit of luck, forms the main story arc of the film but along the way we get to know some of the main characters through occasional flashbacks to their lives before the war. Lt. Anderson was formerly a high school chemistry teacher who has developed migraine headaches due to the stress of resisting his urge to flee from combat. He relies on Doc (Karl Malden) to keep him supplied with painkillers so he can continue to function when the headaches start. Anderson knows he could use his condition to get a ticket home but war has made him bitter and he would rather die. What finally gives him hope for the future is the film’s central message which I found a tad too religious. The film was made with extensive cooperation from the United States Marine Corps and even utilized by them as a recruitment film which seems a bit odd considering its anti-war stance. And they needed recruits as the U.S. had entered the Korean War in 1950 while this film was being shot. The Navy and Marine units who appear in the film would go on to fight in Korea.

Halls of Montezuma at imdb.com

As of May, 2017, Halls of Montezuma is available to rent on DVD from ClassicFlix.com.