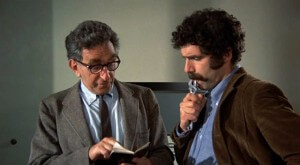 Is this just another “youth” film trying to cash in the success of Easy Rider (1969) by copping an anti-establishment stance? Unlike MASH (1970), which thumbed its nose at authority and Christianity but was essentially a lowbrow comedy, Getting Straight actually contains some meaty material. Elliot Gould plays Vietnam vet, Harry Bailey, (perhaps a reference to George Bailey’s war hero brother, Harry, in Frank Capra’s It’s a Wonderful Life) who has returned to school in order to get his master’s degree in English so he can be a teacher. A former radical, he has decided to work within the system in order to accomplish change and has adopted a cynical attitude towards the younger undergraduates who are trying to change the college’s rules by organizing protests. Eager for his credentials, he agrees to be an intermediary for the college administration and faculty. Yet he is sympathetic to the protesters and the quandary this puts him in is what drives the narrative. At the climax of the story Harry delivers the film’s most important line, which could certainly be considered its message: “It’s not what you do that counts – it’s what you are.” That may mean different things to different people but to me it is the most radical action possible: to change the emphasis from doing to being. Unfortunately the film also contains a lot of fluff: attempts at humor involving Harry’s dilapidated car, his struggle to make ends meet, etc. The biggest problem is the character of Jan, Harry’s girlfriend, played by Candice Bergen. Not only is Bergen unconvincing (just about every review I’ve read mentions how terrible her performance is) but her character is the victim of Harry’s abuse and sexism. Harry is supposed to be the film’s hero and whereas most men will probably sympathize with him I think most women today will find his behavior and attitude deplorable but then again his sexism was pretty much the norm in the era this film was made. The film runs a little over two hours in length. I think if every scene that involves Bergen’s character were cut the film would be much better with enough material left over for a feature length film. It seems that director Richard Rush, who is probably best known for The Stunt Man (1980), was developing his style with this film which uses a lot of close-ups and rack focus. If you pay attention to the editing you’ll notice some amusing match cuts.

Getting Straight on imdb

As of September, 2015 Getting Straight is available to rent on DVD from Netflix.