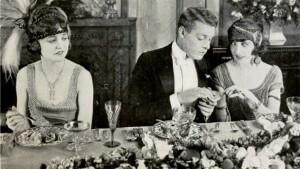 From the late ‘teens to the mid-twenties, Cecil B. DeMille specialized in films that focused on marriage and issues such as infidelity and divorce. Films like Don’t Change Your Husband (1919) and Why Change Your Wife? (1920) fall into DeMille’s  marital drama category and have been restored and released on DVD most likely due to the presence of Gloria Swanson in both films. Forbidden Fruit has yet to have an official DVD release. It stars Agnes Ayres who is best known for playing Rudolph Valentino’s love interest in The Sheik (1921). Forbidden Fruit is essentially a remake of The Golden Chance  (1915), an earlier film by DeMille and screenwriter Jeanie Macpherson, in which a woman of modest circumstances and unhappily married is given an opportunity to escape both her impoverishment and despicable husband. The parallels to the Cinderella story are made explicit with some elaborate fantasy sequences. The opulent sets and costumes were certainly part of DeMille’s attempt to appeal to women, his target audience for these films. The somewhat frothy narrative culminates in a rather effective dramatic climax. As of October, 2015, Forbidden Fruit is available to view on YouTube. It’s an excellent print with an impressive score performed by a string quartet and piano.  Someone must have taken the trouble to commission the score and acquire the print from the Library of Congress or George Eastman House but so far I’ve been unable to ascertain who. If you’re interested in the film I would suggest watching it soon because there’s no telling how long it will remain on YouTube.