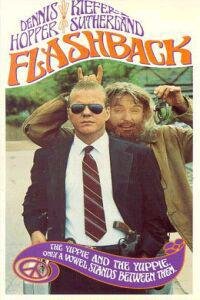 “Once we get out of the 80’s, the 90’s are gonna make the 60’s look like the 50’s.” So says Huey Walker, the Abbie Hoffman inspired central character played by Dennis Hopper in Flashback. Wishful thinking on the screenwriter’s part, perhaps. Hopper is always fun to watch but even his performance can’t elevate this film out of the realm of 80’s American pop cinema though I’d rather watch this than most commercial Hollywood films from that decade.

As of August, 2015 Flashback is available to rent from Netflix