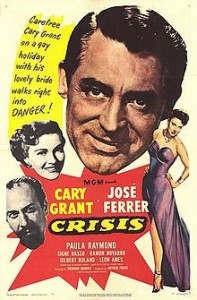 Based on the short story The Doubters by George Tabori, Crisis marks the directorial debut of Richard Brooks (In Cold Blood). Spencer Tracy was to play the part of an American neurosurgeon vacationing in an unnamed Latin American country with his ten year old daughter but the suits at MGM thought a little romance would help at the box office and so Cary Grant was cast along with Paula Raymond as his wife. Raymond’s role is superfluous for the most part and as the character’s function is mostly that of a pawn in a political struggle I think the original idea of a daughter would’ve have been better because it’s easier to accept the presence of a thinly drawn character when it’s a child. The film belongs to Grant and José Ferrer, who plays the dictator, Raoul Ferrago,  of that unnamed Latin American country (parallels to Argentina and Juan Perón are fairly obvious).  Ferrago detains Ferguson (Grant) because he is suffering from a life-threatening brain tumor and doesn’t want to leave the country nor even his presidential palace fearing his government will be overthrown by revolutionaries in his absence. Ferguson resents being held prisoner but feels compelled as a doctor to perform surgery however he risks provoking the ire of the populace if he saves the hated tyrant’s life. Grant, who rarely got a chance to play dramatic roles, does quite well here but judging by the film’s box office performance the public preferred him in his usual lighter roles.  It may not be the most suspenseful political thriller you’ll ever see nor is it a must-see film but I don’t regret the time spent watching it. ★★★★★★☆☆☆☆ (6/10) Crisis at imdb. As of July, 2015 the Warner Archive DVD of Crisis is available to rent from Classicflix.com.