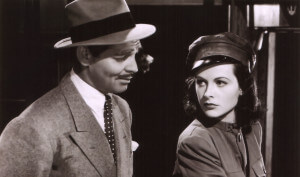 MGM’s Comrade X features Clark Gable and Hedy Lamarr in roles similar to those played by Melvyn Douglas and Greta Garbo in MGM’s Ninotchka (1939). Most likely MGM was hoping to repeat the success they had with that latter film and boost Lamarr’s career. If the snappy dialogue seems familiar it’s because it was written by the same guy who wrote The Front Page (1931) and its remake, His Girl Friday (1940), Ben Hecht. Gable is an American reporter in Moscow who manages to get news past the Russian censors back to his paper in America. Much fun is made of the way things are done in Russia under Stalin’s rule. Lamarr is a beautiful Russian trolly car driver whose life is in danger from the Stalinist regime because of her idealistic support of communism. If that doesn’t make sense perhaps these lines spoken by her father (Felix Bressart) will explain: “The communists have ideas. But they found out you can’t run a government with everybody going around having ideas. So what is happening, the communists are being executed so that Communism should succeed.” Considering what was going on in Europe at the time this film was made, the underlying pro-democracy, pro-America themes aren’t surprising and they are handled fairly subtly and humorously. The movie moves along quickly like a good screwball but dialogue takes a back seat to action in the latter part of the film which is weaker than the preceding portion.

As of March, 2016 Comrade X is available to rent on DVD from ClassicFlix.com