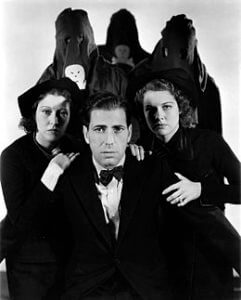 According to the Southern Poverty Law Center, there has been an explosive rise in the number of hate groups in America since 1999. The numbers declined between the years 2011 and 2014 but rose by 14% in 2015 and though statistics for 2016 are not yet available it’s most likely that they’ve continued to rise as interest in white supremacist groups swelled thanks to the Trump campaign. Though Trump doesn’t belong to nor endorse any such group his comments on Muslims and other minority groups have energized hate groups.

The situation was similar in the 1930s. White supremacists in America encouraged by the rise of fascist and racist leaders in Europe and embittered by the dire economic situation in which competition for jobs was fierce flocked to hate groups like the KKK, the Silver Legion, the German American Bund, the Christian Front, and the group depicted in this film, a splinter group of the KKK, known as the Black Legion.  Some historians say that at its peak there were 60,000 to 100,000 members most of whom resided in Michigan and Ohio. Members included a former mayor, a city councilman, a chief of police, along with scores of native-born Protestant white men, many of whom had migrated from the South. Even anti-Semitic, union-hating Henry Ford is rumored to have been a secret supporter.  The Legion’s targets were immigrants, Catholics, Jews, blacks, nontraditional Protestant faiths, labor unions, farm cooperatives, various fraternal groups, and anyone deemed un-American by whomever was in charge of a local chapter.

Despite the disclaimer at the beginning of the film, the story is based on real events. In May of 1936 members of the Legion kidnapped and killed Charles Poole, a Catholic WPA organizer, for supposedly beating his Protestant wife. A group of twelve men were arrested and prosecuted. One of them, Dayton Dean, pleaded guilty and testified against other members thereby exposing what had been a secret organization which led to more arrests and the eventual demise of the group.

The film features Humphrey Bogart in his first lead role. It’s probably the only time he played a regular Joe with a wife and kid and probably the only time you will see him break down and cry in a role. After Frank Taylor (Bogart) loses a promotion at work to the son of an immigrant he gets involved with the Black Legion who, along with Frank, run the immigrant and his son out of town. Frank ends up getting the promotion but his nocturnal activities with the Legion begin interfering with his job and marriage. Frank Taylor starts out as a likable but easily misled character and Bogart manages to make him empathetic even when he is the most despicable. Many critics praised his performance and predicted his rise to stardom. Jack Warner, however, didn’t consider Bogart star material and didn’t cast him very often and the parts he did get were usually as a villain opposite James Cagney or Edward G. Robinson. In fact, Robinson was considered for the role of Frank Taylor but deemed too foreign looking by Warner Brother executives. Of course Bogart eventually became a star after his breakthrough with High Sierra (1941).

Black Legion is one of several films from the 1930s that dealt with the issues of fascism and racism. Columbia Pictures’ Legion of Terror released in 1936 is based on the same story. Warner Brothers, which had been very successful with a string of gritty gangsters films beginning with Little Caesar (1931), was forced to produce more moralistic films when the Hays Code began to be enforced in 1935. So if you find the film too preachy or the message too blatant don’t blame the writers, blame Joe Breen! The Hays Code also didn’t allow the film to identify persons of any specific nationalities, ethnicities, nor religious affiliations as victims of the Legion which is one of the reasons there are no black people in the film, though they were certainly victimized by the group. The writers got around this as best they could by naming Frank’s competitor Joe Dombrowski, implying he was Polish and including a remark about his big nose hinting he was Jewish. Despite the efforts of the Breen Office the film still managed to offend some viewers and was banned in Austria, Switzerland, Cyprus, Finland, Trinidad, and France while the British and Australian releases were heavily censored. The KKK filed suit against Warner Brothers for using their insignia in the film but the case was thrown out of court.

The film ends with a speech given by the judge presiding over the trial of Frank Taylor and his cohorts. He ends his speech with a quote from an Abraham Lincoln speech which is as relevant now as it ever was: “Our reliance is in the love of liberty which God has planted in our bosoms. Our defense is in the preservation of the spirit which prizes liberty as the heritage of all men, in all lands, everywhere. Destroy this spirit, and you have planted the seeds of despotism around your own doors.”  The next two sentences from that speech were not included in the film but are especially relevant today: “Familiarize yourselves with the chains of bondage, and you are preparing your own limbs to wear them. Accustomed to trample on the rights of those around you, you have lost the genius of your own independence, and become the fit subjects of the first cunning tyrant who rises.”

As of January, 2017, Black Legion is available to rent on DVD from Netflix.com.