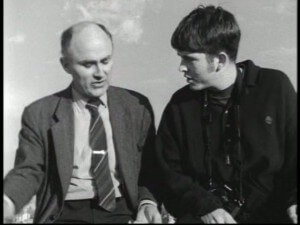 Ultra low budget film (under $5,000) with some passable performances and good for a few laughs. It was shot in seven days and the acting improvised. The suicidal main character, Jimmy, is a superintendent in a Hollywood apartment building which provides the setting for a series vignettes involving the eccentric tenants. Among those tenants is a washed up actor played by the film’s only veteran actor, Bert Kramer, whose performance is easily the best in the film. Kramer passed away in the year following the film’s release. Seems like a dry run in director Stefan Lysenko’s quest to break into commercial filmmaking rather than something that was too unique for Hollywood. In particular, the use of songs and montages to develop the character and create atmosphere is reminiscent of a trend in mainstream American films. The biggest problem is that the story is half-baked. The premise of a man contemplating suicide and searching for a reason to go on living sets up an expectation for some profound insights but apparently Lysenko had none to offer and the resolution of the story’s central dilemma is too superficial.

Between Christmas and New Year’s  at imdb