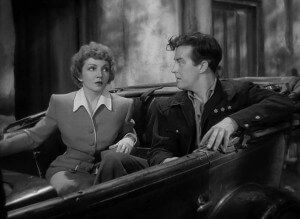 Arise, My Love was inspired by the true story of an American pilot who fought against Franco in the Spanish Civil War, was taken prisoner, and sentenced to die. It is said that his first wife, an attractive singer, pleaded with Franco himself for his life and got him released after which he returned to America. In the film, the pilot, Tom Martin (Ray Milland), is rescued by a reporter, Agusta Nash (Claudette Collette), who pretends to be his wife so she can get a good story. Once they make their escape to Paris Tom is intent on seducing Agusta who is more interested in her career than romance. The film is basically a romantic comedy set against the backdrop of the beginning of WWII. Screenwriters Billy Wilder, Charles Brackett and Jacques Théry provide some excellent banter for the two leads and it’s a wonder that so many risqué double entendres made it past the censors. Ray Milland is very suave and handsome here in a role that seems as though it was made for Cary Grant. Production on the film began in June, 1940 and wrapped in August with the screenplay being constantly rewritten to include events in Europe as they unfolded such as the sinking of the SS Athenia and the signing of the armistice between France and Germany. The film gradually takes on a more dramatic tone as the characters respond to the growing crisis and ends with a speech by Colbert urging America to intervene, making this one of a handful of Hollywood films released in 1940 to make a definite stand against Nazism.  It won an Oscar for Best Story  and Colbert claimed it was her favorite of all the films she worked in.

Arise, My Love at imdb.

As of October, 2015 Arise, My Love is available on a Region 2 DVD at Amazon.com.