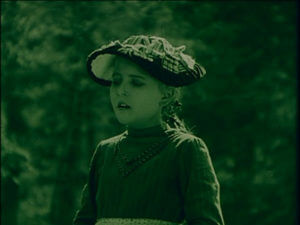 A few French filmmakers in the early twenties utilized rapid-fire editing montage techniques that would later be taken up by Russian filmmakers, most notably Sergei Eisenstein. The earliest example I’ve yet to see is Marcel L’Herbier’s El Dorado (1921). Abel Gance’s La roue (1923) took the technique even further. Jacques Feyder’s Visages d’enfants, which was begun in 1923 but not released until 1925 due to a conflict with a distribution company, also opens with a visually arresting montage sequence before settling, like the other films mentioned, into a more conventional storytelling style. The story is about a young boy who has a difficult time adjusting to to his father’s remarriage after the death of his mother. His father and new stepmother are insensitive to the boy’s profound and unresolved grief. His resentment grows when he is moved to a shabby back room in the house while his new sister is given a nicely decorated room. He breaks down crying when he sees his stepmother wearing his mother’s brooch and spitefully destroys one of his mother’s old dresses when the stepmother decides she’ll make new dresses for her daughter with the material. Eventually the boy’s resentment leads to near-tragic consequences. The film is beautifully photographed in the Swiss Alps and its realism and naturalistic acting, especially by Jean Forest, who played the boy, make the film feel more modern than other films from the era. The DVD is one of a set of three from Image Entertainment featuring outstanding restorations of films by Jacques Feyder and includes an exquisite newly commissioned score which complements the story and atmosphere perfectly.

As of December, 2016 Visages d’enfants is available to rent on DVD from Netflix.com.