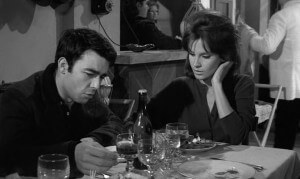 Via Margutta is a narrow cobbled street in the middle of Rome which became an exclusive neighborhood after it was featured in Roman Holiday (1953). In this film it is where of a group of struggling painters, a free-spirited singer with a penchant for tall foreigners, and an American choreographer turned sculptor have made their home. Each of the artists is involved with a beautiful woman and their relationships are explored in episodic fashion. It’s a film about the disenchantment experienced by those who’ve left their small towns to find success in the big city, the struggle to remain true to one’s art and yet survive, and the fleeting nature of success in the art world and the fact that sometimes it has nothing to do with talent. The tone is fairly lighthearted though there’s a tragic aspect as well. It’s not a masterpiece of Italian cinema but is an ably done slice of life type film with good performances and cinematography.

Via Margutta at imdb.

As of November, 2015 Via Margutta is available to purchase on DVD from MovieDetective.net.