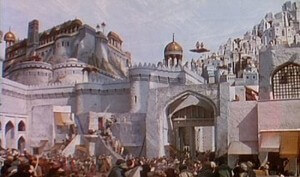 I never saw The Thief of Bagdad as a kid so for me it doesn’t provoke any nostalgia that might cause me to consider it a better film than it really is. Without question the production is lavish, the color spectacular, and the special effects cutting edge for 1940. It deservedly won Oscars for Best Art Direction, Cinematography, and Special Effects. Conrad Veidt, who played the somnambulist Cesare in The Cabinet of Dr. Caligari (1920), and would go on to play Major Strasser in Casablanca (1942) certainly gives an excellent performance as Jaffar, the film’s villain as does Sabu as Abu, the titular thief of Bagdad. Despite all these merits, coming to this as an adult I can only regard the film as juvenile popcorn fare. I found the story and people behind the film’s production much more interesting, all of which one can learn about from the plethora of bonus features found on Criterion’s two disc edition.

The main force behind the film was Alexander Korda, the Hungarian-born producer/director whom I’ve heard referred to as the Louis B. Mayer of the British film industry. Korda founded his own production company London Films in 1932 which released The Private Life of Henry VIII (1933) and Rembrandt (1936), both directed by Korda and starring Charles Laughton. The Four Feathers (1939), directed by Alex’s brother Zoltan Korda, was one of the studio’s most successful films. Alex bought the rights to The Thief of Bagdad from Douglas Fairbanks who wrote the story, produced, and starred in the original 1924 version directed by Raoul Walsh. Korda’s production started out as an operetta and a few of the songs from this early phase remain in the final version. German director Ludwig Berger was hired as director but it soon became apparent that his concept of the film was at odds with Korda’s when Berger insisted that German composer Oscar Straus write the score for the film even though Korda had already hired Hungarian composer Miklós Rózsa for the job. When Berger began shooting and tried to get the actors to move like puppets to Straus’ antiquated music enthusiasm for the production began to wane among cast and crew. Not wanting to break the contract with Berger, Korda started undermining him nefariously while publicly praising him and Straus’ music. He hired Michael Powell to shoot second unit material but gradually gave him more and more directorial duties. Korda himself started directing scenes that Berger was scheduled to direct.  He told Rózsa to play the music he had written for the film on the piano in the room next to Berger’s office for five days. Eventually Berger was persuaded to leave the production. Hardly anything he shot remains in the film though part of the reason for that was due to the fact that Sabu had grown considerably taller during the shoot. Yet Berger’s name appears first in the list of directors in the opening credits.

When Britain declared war on Germany in September, 1939, production on the film ceased while Korda and Powell went to work on propaganda film The Lion Has Wings  (1939), made to boost British morale. Having run out of money to finish The Thief of Bagdad, Korda managed to get United Artists, the production company founded by Charles Chaplin, Mary Pickford, and Douglas Fairbanks, to provide the necessary funds to finish the film. Key members of cast and crew were flown to Hollywood though not Michael Powell. American director William Cameron Menzies and Zoltan Korda directed the scenes shot in the U.S.

The film was Alexander Korda’s most successful in America and the culmination of his career though he continued making films afterwards. Disney’s Aladdin (1992) borrows freely from Korda’s The Thief of Bagdad and even Martin Scorsese and Francis Ford Coppola, who provide one of the commentary tracks on the Criterion edition, cite it as an influence.

The Thief of Bagdad on imdb

As of January, 2016 The Thief of Bagdad is available to rent on DVD from Netflix.