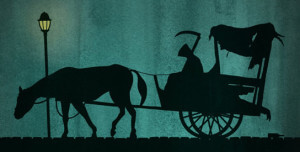 Charlie Chaplin on many occasions called Körkarlen (The Phantom Carriage) the best film he’d ever seen and Bergman, upon whom the film had a strong impact and which he would reference several times in his own films, called it an absolute masterpiece in cinematic history. It is not a horror story as the title might suggest but more like a Swedish version of A Christmas Carol. The film has been called a temperance sermon and it certainly has a moral message. Yet, like A Christmas Carol, the story is so entertaining that it doesn’t seem preachy. The acting is an naturalistic as it gets for a silent film. The Criterion DVD includes commentary by a film historian, an interview with Bergman concerning the film and his working relationship with its director/star, Victor Sjostrom, and another short feature by a film scholar showing parallels between the film and Bergman’s films. No other silent film I’ve seen to date has had such a powerful emotional impact on me but much of that impact is due to Matti Bye’s excellent score which Criterion wisely chose  as the default score. The other score by KTL is just idiotic. It’s as though someone told them to make music for a horror film so they created 90 minutes of monotonous eerie sounds which only occasionally corresponds to the mood of the narrative.

The Phantom Carriage at imdb.com

As of July, 2015 The Phantom Carriage is available to rent on DVD from Netflix.