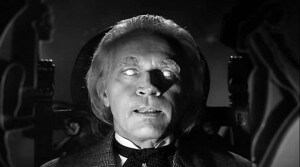 Fritz Lang would make three films featuring the Dr. Mabuse character. The second one, The Testament of Dr. Mabuse (1933), filmed in Germany, is a brilliant and prophetic work in which the parallels between Dr. Mabuse and Adolf Hitler are quite obvious. Hitler liked Lang’s films and according to Lang, Joseph Goebbels, who banned The Testament of Dr. Mabuse, nevertheless offered him a position as the head of German film studio UFA.  Lang, part Jewish, left Germany that very evening. In America Lang was successful as a filmmaker though he wasn’t well liked by actors, particularly Henry Fonda, who resented his autocratic behavior. By 1960, Lang, then 70, was unable to find work in Hollywood and agreed to travel to Germany to remake The Indian Tomb, a film he had developed in the 20’s but didn’t get a chance to direct. When that was finished, producer Artur Brauner suggested a remake of Testament of Dr. Mabuse but Lang persuaded him to let him make a new installment of the series, Die 1000 Augen des Dr. Mabuse (The 1,000 Eyes of Dr. Mabuse). There was to be a production with English actors as well but financial support was withdrawn when Lang refused to agree to working with a co-director. Thus we only have the German version which unfortunately was dubbed for US and UK release. I might have enjoyed this film a little more if it had been in German with English subtitles but it still suffers from an incoherent plot and dialogue that sounds as though it was written by high school students. The last fifteen minutes manages to be somewhat exciting though full of improbabilities but the final scene is as sappy as they come. Yet the film was successful and led to a series of new Mabuse films though none were directed by Lang who was by then nearly blind. He died in Los Angeles in 1976.

The film is available to stream on Amazon.com as of August, 2015.