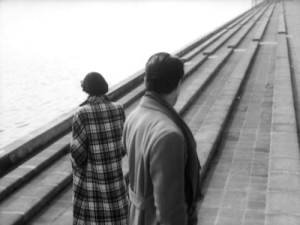 The year 1950 marked the feature film debuts of two prominent Italian directors, Federico Fellini and Michelangelo Antonioni. Both started their careers in the film industry as screenwriters in 1942 though Antonioni made several documentary shorts beginning in 1947 before his first feature film, Story of a Love Affair (original Italian title: Cronaca di un amore). Both directors broke from their Neorealist backgrounds with their first features. Fellini’s and co-director Alberto Lattuada’s Variety Lights is a bittersweet backstage comedy whereas Antonioni’s Story of a Love Affair is influenced more by American film noir than Italian Neorealism. Most of the characters are affluent and the film concerns the dynamics of a relationship rather than the social issues treated in a film like Bicycle Thieves (1948). It starts out like a police procedural as Enrico Fontana, a wealthy businessman, hires a private detective to investigate his beautiful young wife’s past. The wife, Paola, is played by nineteen year old Lucia Bosé who won the Miss Italia beauty contest in 1947. After the detective snoops around Paola’s home town one of her former beaus, Guido, travels to Milan to warn her. Seven years previously Guido’s fiancée died after falling down an elevator shaft while they stood by and watched so they assume the detective is investigating her death. Ironically it is Fontana’s suspicion that reunites the former lovers and rekindles their passion. Parallels to The Postman Always Rings Twice (1946) appear when Paola starts suggesting that Guido kill Fontana so they can be together. The rest of the film however does not play out like a typical noir but veers toward a psychological study of the two lovers.

Even in his first feature Antonioni displays the distinctive style that would permeate his later films. One of these traits is his use of the physical environment and architecture to comment on the characters and situation. Notable in this film is the use of one-point perspective which may suggest a narrowing of possibilities for the characters and their relationship. The film’s low budget is most apparent in the sound design and minimally orchestrated score. Like most Italian films the sound was post-synched. The original negative was lost so the film had to be restored from a surviving print which may be partially to blame for the less than stellar audio. The Lorber Films DVD edition apparently has the same transfer used by the now defunct NoShame label in addition to a second disc of extras all of which I found rather tedious.

Story of a Love Affair at imdb.com

As of April, 2016 Story of a Love Affair is available on DVD and for streaming at Amazon.com