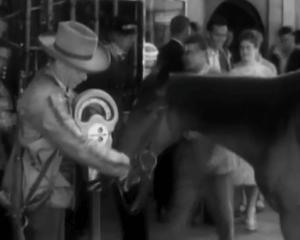 This South African modern take on the Rip Van Winkle story is set in 1859 and 1959. Rip van Wyk is a simple farmer from a small village who’s a crack shot with a rifle. He’s in love with the daughter of an innkeeper, Rina, who also loves him but he’s too shy to ask her to marry him. At a celebration at the inn he is tricked into drinking some hard liquor by his opponent in a shooting match which causes him to lose the contest. On his way home he meets a mysterious well dressed stranger who persuades him to drink a potion after which Rip immediately falls asleep. Upon awakening he finds himself in a strange new world and he eventually discovers that he has slept for 100 years but unlike the original story, he hasn’t aged. He happens to see a woman whom he takes to be Rina (played by the same actress) but his insistence that he knows her leads to his arrest and confinement in the home of a psychiatrist. From time to time the mysterious stranger reappears but always vanishes when Rip tries to show him to anyone else. The stranger’s motivation for transporting Rip to the future remains a mystery to Rip and the viewer until the end. The tone of the film is lighthearted but the ending is quite touching.

As of August, 2019 Rip van Wyk is available on DVD from sinistercinema.com.