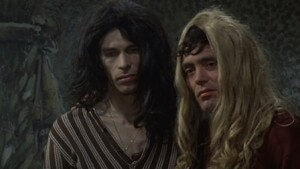 Ostia is a large neighborhood in Rome which happens to be where the cowriter and producer of this film, Pier Paolo Pasolini, was murdered five years after its release. It is the directorial debut of Sergio Citti who collaborated with Pasolini on several films. Knowing that Pasolini was homosexual and a communist will help somewhat in understanding this film though repeated viewings may be necessary to grasp its meaning in full. It’s about two brothers who live together as petty thieves. One day, along with three of their pals, they come upon a young buxom blonde lying in a field, apparently dead. When it’s determined that she is only sleeping the girl is carried to the brothers’ place, undressed, and the three guys have their way with her. She is conscious but strangely passive, as if drugged. The brothers don’t partake but get drunk on wine in the room below. When the men have finished and left, the brothers enter their bedroom, put the naked woman on the floor, fling their clothes on top of her as they undress, and joke about how she makes a good carpet. She continues to live with them but they remain indifferent to her. It is only when she inadvertently shows a preference to one of the brothers that they become interested in her though the jealous brother may be more interested in his brother as indicated by his attempt to make his brother recall an incestuous moment from their youth. The film also contains what can be seen as mocking of Christianity which comes about while the brothers are serving time in jail and a priest comes to hear their confessions. The excellent cinematography adds visual appeal and the editing is also interesting.

As of August, 2019 Ostia is available to stream at ok.ru.