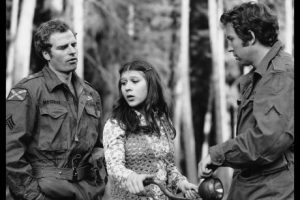 o.k. is Michael Verhoeven’s fourth feature film. Unlike his excellent The Nasty Girl (1990), o.k. is an experimental film undoubtedly inspired by other films from the New German Cinema. For this film that translates to a minuscule budget with a deliberate disregard for realism creating a Brechtian distancing effect. The story is based on the Incident on Hill 192, the torture, gang rape, and murder of a young Vietnamese girl by U.S. soldiers which occurred in 1966 during the Vietnam War. However, there is no mention in the film itself that it is based on real events nor any hint in the beginning of its serious subject matter. Before the story gets started the actors, out of character, introduce themselves and sort out their wardrobe. They portray American soldiers but speak German throughout the entire film while a clearing in a Bavarian forest stands in for the Vietnamese jungle. The Vietnamese girl is played by Austrian actress Eva Mattes (who has also appeared in films by Rainer Werner Fassbinder and Werner Herzog). The first half of the film is actually quite funny as the five men dig trenches, play cards, tell jokes, and tease each other. The rape and torture scenes however are graphic and disturbing. The innovative cinematography is by Igor Luther who also shot The Tin Drum (1979). Despite the unconventional approach this is a well made film including some remarkable editing and naturalistic performances. It created a controversy leading to the cancellation of the 20th Berlin International Film Festival when jury president George Stevens (director of Shane) resigned after failing to get the film removed from the festival, claiming it was anti-American. Brian De Palma’s Casualties of War (1989) is also based on the same event.