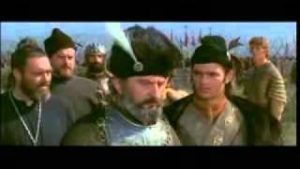 Considered by many to be one of the best if not the best Romanian film ever made, Michael the Brave (Mihai Viteazul) is an epic historical drama depicting the efforts of a late 16th Century Wallachian prince to unite the Romanian principalities of Wallachia, Transylvania, and Moldavia into one nation. He successfully waged war against the Ottoman Empire but his most dangerous enemies turned out to be his so-called Christian allies in Europe. The cast of thousands, courtesy the Romanian Army, makes for some impressive battle scenes. This film is only available on YouTube as far as I know which is unfortunate as I’m sure it would be visually stunning on the big screen or if it was restored for release on DVD or Blu-ray.

Michael the Brave at imdb