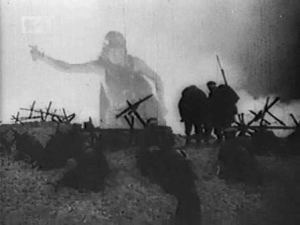 Latvia is a European country on the Baltic Sea between Lithuania and Estonia. This film was made to commemorate the Latvian victory over the German-White Russian army on November 11, 1919. To this day Latvians celebrate November 11th as Lāčplēsis Day. The film begins with a dramatization of Lāčplēsis, a Latvian epic poem written in the 19th Century based on local legends depicting the struggle of the hero Lāčplēsis to free heroine Laimdota from the evil Black Knight. In the poem both the hero and villain drown in a river and it is said they would continue to  fight one another until Lāčplēsis defeats the Black Knight at which time Latvia will be a free nation.  The film then jumps to the 20th Century and Latvia’s struggle against occupying Russian and German forces from 1905 to 1919. The same actors who played the characters in opening section also play their character’s reincarnations in the modern story. For instance, the Black Knight becomes an evil German officer. A struggle over the possession of a magical brooch that began in the medieval story also plays a part in the modern story. Interestingly, the brooch is decorated with swastikas though this had nothing to do with Nazism as it is a symbol used by many ancient cultures. The film is silent and utilizes lighting techniques from German Expressionist cinema and editing techniques from Eisenstein. The fluid camera work and artistic compositions make this film much more visually appealing than most early sound films. However, the extreme vilification of Germans and glorification of Latvians lends a somewhat cartoonish aspect.

As of November, 2021, Lāčplēsisis available from the National Film Centre of Latvia with English subtitles: https://www.filmas.lv/en/latvian-film-classics/#lacplesis