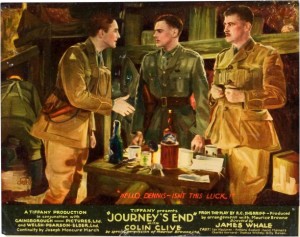 R.C. Sherriff’s 1928 drama Journey’s End was based on his own experiences as an officer in WWI. It opened in London at the Apollo Theatre with James Whale directing and Laurence Olivier in the lead role. After two nights the production moved to another theatre though Colin Clive replaced Olivier who had taken a role in another play. By the end of 1929 the play was being produced around the world in English and 17 other languages. The film is James Whale’s debut as a film director and Colin Clive’s first screen appearance. Though a British production, it was filmed in Hollywood in order to take advantage of the new sound stages. The film’s theatrical origin is rather apparent as most of it takes place in an officer’s dugout and is mainly dialogue-driven. Colin’s performance as an alcoholic officer on the verge of a breakdown is somewhat overwrought. After this film both Whale and Clive remained in Hollywood and teamed up again the following year for Frankenstein. Like the character he plays in this film, Clive was a chronic alcoholic and died from complications of tuberculosis at age 37.

As of January, 2016, Journey’s End is available on YouTube: