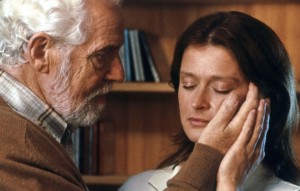 Ingmar Bergman retired from filmmaking after the release of Fanny and Alexander (1982) though he continued directing plays, writing screenplays, and directing movies for T.V. until the year of his death in 2007. He wrote the screenplay for Faithless (original Swedish title: Trolösa) which is loosely based on events connected with an adulterous affair from his own life. Liv Ullmann, who appeared in many of Bergman’s most important films and who also was once his lover and had a child by him, directed the film, this being her fourth effort in that capacity. Another Bergman alumni, Erland Josephson, who appeared opposite Ullmann in Bergman’s T.V. mini-series Scenes from a Marriage (1973), plays an elderly, reclusive writer who conjures up a character by the name of Marianne (played by Lena Endre) which was also the name of the character Ullmann played in Scenes from a Marriage. He asks her to sit by the window so he can see her. She says first he must describe her. He begins to describe her but asks her to fill in some of the details. When she appears at the window he asks her to talk about David (played by Krister Henriksson). He hands her a box of photos and keepsakes and looking through them starts describing David as a theatre director and the best friend of her internationally famous conductor husband Markus (played by Thomas Hanzon) and how well he got along with her daughter Isabelle. “And that’s about it.” she says stifling a sob. “Are you crying?” asks the writer.  She replies “Perhaps it’s you crying.” At this point we enter into a film within the film, presumably the story that the writer is working on with the aid of its lead character though we return from time to time to scenes with the writer and the actress who plays Marianne and it’s evident that the telling of the story has an emotional impact on both of them.

I don’t think even Bergman could’ve done any better than Ullmann at directing this film. It deserves a place alongside his most penetrating and absorbing works as a director. The score is spare and subtle and cinematographer Jörgen Persson does a masterful job lighting his compositions. It’s a confession of sorts, perhaps a form of self-punishment to expunge the guilt he felt for the harm he inflicted on the real life people whom the characters in this film represent. We all have regrets for things we’ve done in the past. This film might make you feel better about yourself by comparison or perhaps you see life as a learning process and can forgive yourself for your transgressions.  For Bergman, the son of a Lutheran minister whose strict parenting concepts included locking him in a dark closet for wetting the bed, it seems self-forgiveness wasn’t possible.

Faithless at imdb As of December 2015

Faithless is available on DVD from Amazon.