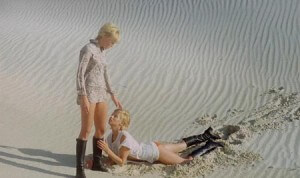 Alain Robbe-Grillet was born in France in 1922 to a family of engineers and scientists. He was trained as an agricultural engineer and embarked on a career of scientific research. At age 30, however, he turned to writing novels and in 1961 collaborated with Alain Resnais, writing the screenplay for Last Year at Marienbad (1961). L’Immortelle (1963) was his first film as writer and director. L’Eden et après (Eden and After) was his fourth effort as auteur and his first film in color. As one reviewer at imdb states, Robbe-Grillet set out to be “hostile to the very idea of a narrative” early on in his career. Like Last Year at Marienbad, Eden and After doesn’t have a straightforward narrative. It concerns a group of college students who frequent a cafe where they stage various scenarios some of them involving Russian roulette and gang rape. Enter Duchemin, a stranger, who offers them something he discovered in Africa, a powder of fear. One of the girls, Violette (Catherine Jourdan), tries the powder and from that point on it’s difficult to tell whether what follows is supposed to be reality or hallucination. The structure of the film is based on Arnold Schoenberg’s twelve-tone technique which does away with a tonal center in music and utilizes all twelve tones in a set but randomly chosen order. What Schoenberg did with pitches, Robbe-Grillet did with images. Whether or not you enjoy this type of experimental fare the film is beautiful to look at. His use of color is striking and much emphasis is placed on composition. The cinematographer was Igor Luther, who also shot The Tin Drum (1979). There’s quite a bit of female nudity, especially towards the end which has led some to consider this film nothing but highbrow softcore but in my opinion it deserves to be considered a work of art.

Eden and After at imdb

As of August, 2015 the film is available on BD from Amazon