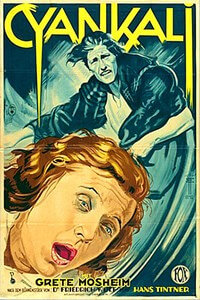 Cyankali is German for cyanide, which was sometimes used to terminate unwanted pregnancies in Germany’s Weimar Republic (1918 – 1933). It’s a social issue film that brings up the number of women who died from illegal abortions every year a few times over the course of the film. Besides illegal abortions the film also deals with other social issues like poverty, workers’ rights, and class distinction.  Overall it seems the purpose of the film was to raise awareness of the plight impoverished women faced during these difficult times in Germany: they were barely able to feed themselves so keeping the child was out of the question but because abortions were illegal they were forced to seek the services of illegal abortionists. A silent film for the most part though there is some spoken dialogue towards the end. It also has a score which vanishes for a while in the middle and returns toward the end. The folks at rarefilmsandmore.com who distribute the DVD and translated the German subtitles to English had some fun with the translation using phrases like “shit hits the fan” which I doubt had a German equivalent in 1930. The film is something along the lines of ‘Reefer Madness’ (1936) though it is never funny, not even unintentionally.  The writers tried to make this PSA into an entertaining story but the characters aren’t fleshed out, the acting is passable at best, and the overall production is clunky and amateurish. It comes as no surprise that the film hasn’t been restored by the likes of Criterion or Kino but may be of interest to completists interested in films on abortion, early sound films, or early German Cinema.

After ordering this and a collection of Segundo de Chomón  films from rarefilmsandmore.com I’ve pretty much decided to stop buying DVDs from them and other companies like Grapevine Video and Alpha Video. Sure, sometimes they have films on DVD that no one else has but so far it’s because the films are subpar.  And their prices seem out of proportion when you consider that they haven’t invested in any restoration efforts or commissioned new scores.