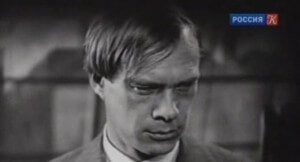 Most of Russian director Yevgeni Chervyakov’s films from the twenties have been lost and his surviving films from the thirties have given him a reputation as a minor figure in Soviet cinema. Yet his contemporaries, including Aleksandr Dovzhenko, had high praise for his directorial efforts in the twenties. In 2008 his film Moy Syn (1928) was found and is considered his masterpiece. The film is shown at festivals but is not yet available on DVD as far as I know. Cities and Years (Russian title: Goroda i gody) is another hard to find film though I was able to find a copy which has a red, white, and blue Россия K logo displayed in the upper right corner throughout the film. It’s the story of a Russian painter in Berlin enjoying the patronage of a German officer. When WWI erupts and Russia declares war on Germany, a bloodthirsty mob of patriotic Germans try to get their hands on the painter but he is saved by his patron. Later, the German is captured by the Russians but after the revolution he manages to assume leadership of a royalist battalion and fight the Red Army by whom he is defeated once again but is allowed to escape by the painter. The film reminds me of Eisenstein’s films about the revolution, not only in its portrayals of capitalist societies and outright propaganda but also in its use of the montage technique. Chervyakov died in 1942 fighting the Germans in Leningrad.

Cities and Years at imdb.

As of March, 2020 Cities and Years is available on YouTube: