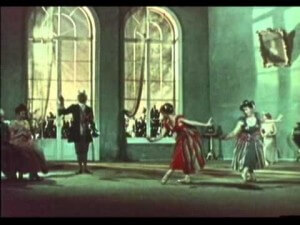 I can’t say I’m a fan of ballet but I like Prokofiev’s music so I decided to give this a shot. The Cinderella story is a great choice for a ballet because the story is so well known and also includes a ball which is the centerpiece in this production. Cinderella also seems like a story that would meet approval with Russia’s communist regime and it’s interesting to note that at the very end Cinderella retains her worker apparel rather than being magically transformed back into her fancy ballroom dress as I believe she does in most versions of the story. This isn’t merely a recording of a stage production as close-ups are edited in which helps one to relate to the characters as actors. The sets are magnificent and a lot of attention was given to the lighting. I liked the muted color even though that may have to do with a lack of restoration. This is probably the first time I’ve had an emotional response to this story which I think is due to the music and the fact that the lead actress/dancer captured my heart. It also had me wondering how ballerinas manage to dance on their toes and even after reading about pointe shoes, etc. I’m still mystified and in awe.

As of January, 2016 Cinderella is available in six parts on YouTube: