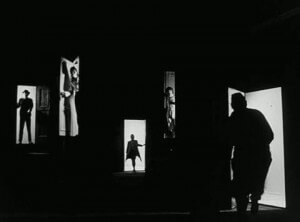 Pavel Juráček isn’t as well known as other exponents of the Czech New Wave like Miloš Forman and Věra Chytilová most likely because his career ended after the release of his second feature film Prípad pro zacínajícího kata (Case for a Rookie Hangman) which was banned and the director blacklisted for the rest of his life. He also wrote the screenplay for Jan Schmidt’s Late August at the Hotel Ozone (1967) and collaborated with Chytilová on the screenplay for Daisies (1966). Case for a Rookie Hangman is loosely based on the third part of Jonathon Swift’s Gulliver’s Travels, A Voyage to Laputa, Balnibarbi, Luggnagg, Glubbdubdrib, and Japan. There are also references to Lewis Carroll’s Alice in Wonderland and Franz Kafka’s The Castle. It is similar in some respects to Orson Welles’ adaptation of Kafka’s The Trial (1962). The film is divided into chapters, the first of which is Gulliver’s trip down the rabbit hole which contains some of the film’s most striking and bizarre images. The rest of the chapters entail his encounters with the inhabitants of Balnibarbi and Laputa and their absurd rules. He discovers on his visit to Laputa, the flying island where the rulers reside, that no one is in charge, their king has left long ago to become a porter in Monte Carlo and the island has been drifting aimlessly since then. At the end, as Gulliver leaves Balnibarbi with the village idiot he notes that his watch is running backwards. The idiot replies, “At least it’s still ticking!” The Czech New Wave filmmakers were dissenters whose films were meant “to make the Czech people collectively aware that they were participants in a system of oppression and incompetence which had brutalized them all.” 1  Unfortunately, after the Soviet Union crushed the reform movement known as the Prague Spring, these filmmakers either fled the country, were blacklisted, or faced censorship of their work.

Case for a Rookie Hangman on imdb.

As of December, 2015 Case for a Rookie Hangman is available on DVD from Movie Detective.net.