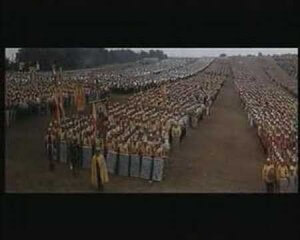 Released in 1981 to commemorate the 1,300th anniversary of the founding of Bulgaria, this 4½ hour epic is told from the point of view of Velisarius, a Roman, whose father, a diplomat for the Byzantine Empire, left him with the Bulgars as a kind of insurance for a treaty with them. After his return to Constantinople twenty years later, Emperor Constantine IV, who had just suffered a defeat at the hands of the Bulgars, orders him to write an account of the battle but with a pro-Byzantium slant saying “History is not the past itself, but what we know of the past. Words! The whole knowledge of mankind is someone’s words!”  The film is divided into three parts, the first of which takes place in Old Great Bulgaria, a region which is now modern day Ukraine. Khan Kubrat managed to unite the semi-nomadic warrior tribes during his lifetime. He treats Velisarius as one of his own sons. Velisarius becomes very close with one of Kubrat’s five sons, Aszparuh, whom he teaches how to read and write Greek but is not allowed to speak of Christianity. Aszparuh teaches Velisarius how to ride a horse and about their religion which includes a sky deity they call Tangra. After the death of Kubrat the Bulgars split into five groups to find new land to settle in due to pressure from the Khazars, another semi-nomadic warrior tribe. Part two follows the westward migration of the faction led by Aszparuh, now Khan, and part three covers their settlement in the land that is now modern day Bulgaria, their union with the Slavs already living in the area, and the battle with Constantine’s army of 60,000. For Constantine this was not only a war to preserve and expand the empire’s territory but also a religious war, for both the Bulgars and Slavs were pagans. Even though Bulgaria eventually became a Christian nation, the film definitely takes a stance against Constantine’s crusades as evidenced by an early scene in which a member of the clergy warns the emperor that “Christ will punish you for the violence in His name!” Production values for the film are uniformly high though the sound design for the big battle scenes is a bit cheesy but perhaps the technology for recording a cast of tens of thousands on location wasn’t all that advanced in 1981. The score is well done and the acting, especially the actors playing Aszparuh and Velisarius, is very good. I felt that the third part could’ve been whittled down a bit, particularly the battle scenes which weren’t all that suspenseful and even repeated some of the same footage. There are scenes of animal cruelty which were hopefully simulated but may be disturbing to some. Overall, I feel the film is worth the time investment and would recommend it especially to those who enjoy epics, war films, and ancient history.