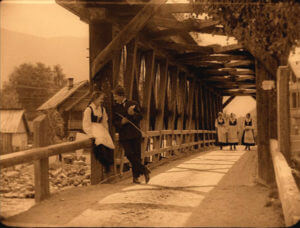 Breistein also wrote the screenplay, his first, which is based on a story by Norwegian writer Kristofer Janson. The story concerns an orphan girl, Anne, who grows up on a farm where she is taken in after the death of her transient mother when she was still a baby. When she grows up a love triangle forms with her stepbrother, Haldor, and Jon, the farmhand who found her when she was an infant. Haldor proposes to Anne but his mother objects due to Anne’s being a girl of “unknown origin” which makes for a compelling drama with performances that are surprisingly naturalistic considering the era. The ending, however, is a bit too pat and seems uncharacteristic for Scandinavian cinema. Anne as a woman is played by Norwegian actress Asta Nielsen who is not the internationally famous Danish actress who shared the same name.

The film features beautiful Norwegian landscapes and carefully composed, painterly scenes.  The camera work is years ahead of most films made in 1920. A series of romantic melodramas utilizing natural landscapes ensued, mostly directed by Breistein,  which came to typify Norwegian silent cinema. The new restoration by the Norwegian Film Institute available on Blu-Ray is immaculate and the orchestral score composed for this edition enhances the film immensely.

As of April, 2016 Gipsy Anne is available on Blu-Ray from Amazon.com