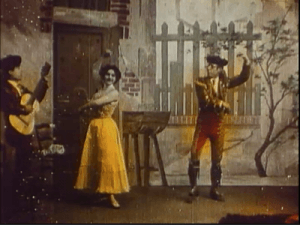 Spanish Dancers is the title given for this film on the Flicker Alley DVD Discovering Cinema: Movies Dream in Color. As there is no entry for this film on imdb.com nor any other online film catalogues I asked film historian Dr. Robert J. Kiss if he could identify the film. His response follows below:

“I don’t necessarily buy the idea that this dates from 1898; for one thing, it seems simply too long for that year, particularly when compared with dance shorts produced by Gaumont, Lumière or Pathé. On a technical level, I might also expect to see evidence of at least one cement join (with an accompanying jump where the action would have needed to be paused and re-started) to get the film beyond the standard 65ft, 75ft or 100ft lengths of shooting stock that were most commonly available at that time.

I do, however, find [Spanish Dancers] reminiscent of the work of Ambroise-François Parnaland between 1901 and 1903. Stylistically, almost all his studio-bound work from that period makes use of a split-angle backdrop to create a sense of depth; the left-hand side of the screen has a backdrop at quite an extreme angle, while the right-hand side is presented more flatly, almost (but still not quite) in alignment with the camera. This is so commonplace in surviving Parnaland films (and absent from the output of other manufacturers of the period) that it can more or less be considered a Parnaland ‘hallmark.’ A running time of two minutes, with no cement joins, is also in line with Parnaland productions of 1901 to 1903, as is the blend of sepia toning and vibrant orangey-yellow tinting (the latter judgement based, admittedly, only on a couple of surviving examples).

But then there’s that guitarist; he sings, clearly mouthing, every word of the song. I suspect that an expert French-language lip-reader might be able to figure out the lyrics, if only this could be viewed in sufficient quality. However, if this were ‘merely’ a Spanish dance short, then there would be no need for it to go on for a full two minutes… or to have the singing of every lyric shown… and I just wonder whether this might be an early Georges Mendel Cinéma-Grapho (sound-with-gramophone-accompaniment) short. An abridged version of something from Carmen, perhaps. Between 1901 and 1903, Mendel’s Cinéma-Grapho system was employed exclusively at traveling fairs and tent shows; it was replaced by his Cinémato-Gramo system in 1904, which could be operated in larger theater auditoriums (with one of the first ‘upgrades’ to the augmented system indeed a new version of Carmen).

Next to nothing is known about those earliest pre-1904 Georges Mendel sound shorts. However, during the period of their manufacture, Mendel and Parnaland were certainly working together to some extent, with a number of titles from the 1900 Parnaland Catalogue turning up in the 1901 Mendel Catalogue (the best known example is the extant Grosse tête de Pierrot, also included in the 1901 Mendel Catalogue as La langue de Pierrot). At any rate, it’s just possible that Parnaland may have been manufacturing shorts like this for release by Mendel. All of this is reasoned conjecture at best, of course, without having examined the original print.”